Although no Lancasters were supplied to the Russian military under the lend lease scheme in WW2 two examples were in fact used in Soviet Air Force markings.

In preparation for Operation Paravane, the attack on the German Battleship Tirpitz which was anchored in a fjord in the far north of Norway, thirty-eight 617 Squadron and 9 Squadron Lancasters relocated to Yagodnik in Russia on 12 September 1944.

20 Lancasters from 617 Sqn. departed RAF Woodhall Spa for RAF Lossiemouth in Scotland to refuel and then continue to the remote Russian airfield at Yagodnik about 15 miles south of Arkhangelsk. They were accompanied by 18 Lancasters from 9 Sqn. from RAF Bardney, two 511 Sqn. Liberators (with spares and ground crew), and a single 540 Sqn. Mosquito. 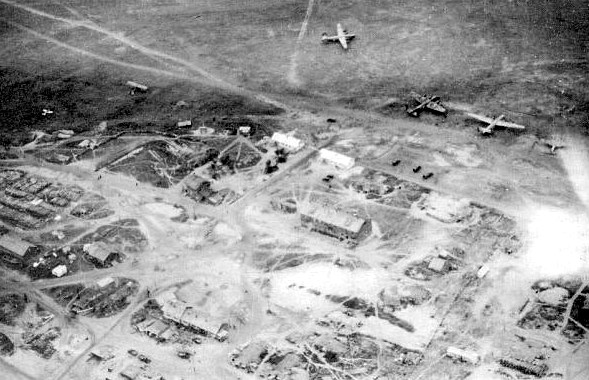 Yagodnik Airfield with one  Lancaster, the two 511 Sqn. Liberators and the 540 Sqn. Mosquito

Unfortunately, by the time they approached Yagodnik the weather conditions had deteriorated, and the remote location made navigation difficult. Only twenty-six Lancasters managed to land safely, the other twelve landed at other airfields or crash landed.

Six were written off but 617 Squadron Avro Lancaster B.I (ME559 – KC-Y) crash landed at nearby Kegostrov and was repaired and modified by the Soviet Air Force and used operationally. Another Lancaster (identity unknown) was also repaired and used.

Many thanks to Harris Ustav from Estonia for providing this Russian link which I have translated using Google Translate (so apologies for translation errors and inaccuracies). http://alternathistory.com/ispytano-v-sssr-tyazhelyi-bombardirovshchik-avro-lancaster/?fbclid=IwAR2LfI3cRmtiswo4Z6K_EpGX7xsTpN8YeHdYjXYPVhW1g040bcl3MlYCw3g

This article by Vladimir Kotelnikov, published back in 1992, is being laid out as an addition to the article by the distinguished colleague Serg, “Airplanes of alternative air forces”.

During the Great Patriotic War, Soviet aviation was in dire need of a supply of heavy bombers. The country’s aircraft factories, overloaded with the production of tactical aircraft, could not provide the Air Force with any significant fleet of large multi-engine aircraft. The only domestic heavy Pe-8 bomber, built in 1941-44, only 79 examples were produced.

Very few machines came to us through official channels of assistance from the Allies – one American B-24D “Liberator” and several English “Stirling”. Nevertheless, at the end of the war and in the first post-war years, our Air Force was armed with a number of heavy bombers of English and American production from those recovered after emergency landing or interned in the Far East. Among them were aircraft such as Avro “Lancaster”. The story of their appearance with us is as follows.

In September 1944, the Soviet and British commanders launched a joint operation Paravan against the German battleship Tirpitz, which was defending in the Altenfjord on the coast of Norway. The battleship was previously damaged several times but continued to be a potential danger in the way of northern convoys from England to the Soviet Union. During the operation 38 “Lancaster”, 2 transport “Liberator” and one reconnaissance “Mosquito” sent to the airport Yagodnik in the Arkhangelsk region.

The formation, assembled from aircraft of the 617th and 9th bombing squadrons of the Royal Air Force, was equipped with Lancaster versions I (with Rolls-Royce Merlin 24 engines) and III (with Packard Merlin 224 engines), specially adapted for hanging heavy bombs weighing 12,000 pounds (5450 kg). Outwardly, they differed from the standard ones with a deep pot-bellied bomb bay and the absence of an upper FN50 turret.

From 6 a.m. on September 12, British planes began to land on the airfields of the Arkhangelsk junction. For various reasons, 10 bombers made emergency landings in Onega, Belomorsk, Kegostrov, Molotov (Severodvinsk) and simply in the tundra. One aircraft got into such an uncomfortable place that it was necessary to drop the parachutist, who led the crew to the river, where the MBR-2 flying boat was waiting. 7 aircraft were damaged, one of them was repaired by our and English specialists.

September 15, 27 “Lancaster” (including the refurbished) bombed on the “Tirpitz”. Our navigators led them to the target. Soviet aircraft also conducted preliminary reconnaissance and then photographed the results of the raid. Of the 21 heavy-duty Tallboy bombs (six vehicles carried conventional armor-piercing bombs of 224 kg each), one hit directly into the battleship, and several smaller ones also hit the target. However, the Tirpitz remained afloat. The British had no losses.

From September 16 to 28, all serviceable “Lancaster” returned to their base in the UK. Subsequently, they still managed to finish off the “Tirpitz”, which the Germans transferred to a new place.

Six damaged Lancaster remained on Soviet soil – one Lancaster III and five Lancaster I. Four of them were investigated for possible recovery. Two of the least damaged were delivered to Kegostrov, where in the workshops of the Air Force of the Belomorsky Flotilla, under the leadership of the chief engineer Kiryanov, they were engaged in their repair and alteration.

All weapons were removed from them, the rear turret was sewn up with duralumin sheets. The damaged nose was changed: the old “stepped” nose with a rifle mount was replaced with a new transparent fairing. The colour remained the same, English (brown-green top and black bottom), only the identification marks were painted over with our green paint (which differed in tone) and red stars in a black border were applied on top. Both aircraft were redone the same way.

One of them, with the number “01”, went to the 16th Transport Detachment (TRAO), where it was operated from the end of January 1945 (presumably it was a plane with the number ME559, issued by the Metropolitan-Vickers company). The commander of the aircraft was V. Evdokimov, the navigator – V. Andreev. The 16th TRAO was the heir to the famous 2nd separate air group, I.T. Mazuruk, formed at the beginning of the war from polar pilots. Although it was called transport, it was used not only and not so much for transporting people and goods, but for escorting convoys, ice reconnaissance, and patrolling. The Lancaster also flew to search for submarines (although it did not carry either bombing or small arms), to reconnaissance in remote areas where its long range and flight duration were very valuable. For example, on January 24, Lancaster conducted an ice reconnaissance of a section of the Beluga Bay (Novaya Zemlya).

The crew of “Lancaster” we were 4-5 people: one or two pilots, a navigator and two mechanics.

In August 1945, this machine was sent to the Pacific Ocean, but in Krasnoyarsk it got stuck due to lack of fuel. While waiting for gas, the war with Japan ended. In the summer of 1946 this “Lancaster” was transferred to Riga, to the aviation technical school, as a visual aid. Its further fate is unknown.

The second restored “Lancaster”, with the number “02”, ended up in the 70th separate transport regiment (OTRAL) of the Northern Fleet Air Force. The commander of this machine was I. Dubenets. After the disbandment of the 16th TRAO in 1946, both aircraft were not together for long in the 70th motraprap, “02” after the war they crashed when landing at the airport in Izmailovo, in Moscow. The bomber rolled out of the airfield, broke the landing gear and mutilated the fuselage. They did not begin to restore it again – they wrote off.

Of course, two planes could not change the course of the war. Nevertheless, it must be pointed out that, unlike the B-17 and B-24, which did not take part in military operations with the Soviet crews, the Lancaster with the red stars managed to make a significant number of sorties, although they did not meet with the enemy “Face to face”, and thus contributed to the overall victory.

My other Avro Lancaster related blogs:

What happened to the Lancasters used on the Dambuster Raid?
https://pleszak.blog/2019/08/20/what-happened-to-the-lancasters-used-on-the-dambuster-raid/

From Manchester to Lincoln via Lancaster – An aviation aristocracy family tree
https://pleszak.blog/2019/05/07/from-manchester-to-lincoln-via-lancaster-an-aviation-aristocracy-family-tree/

Testing and training for the Dambuster Raids – what’s left to see?
https://pleszak.blog/2018/06/13/testing-and-training-for-the-dambuster-raids-whats-left-to-see/