Mellor is a small village in the foothills of the Pennines about 10 miles south-east of Manchester. It’s now right on the very edge of the Derbyshire border but in Greater-Manchester. It was once in Cheshire and before that in Derbyshire.

Sitting on the northern the edge of a ridge above the village is the ancient St Thomas’ Church, to most simply known as Mellor Church. It’s in a spectacular location with stunning views west to Manchester and beyond, across the Cheshire plain towards Liverpool and North wales; north to Ashton, Bolton and Oldham, and south and east to the Derbyshire hills. – It’s hardly surprising that it has been so much painted, photographed, and used in TV. But perhaps remarkable it’s not so well represented in verse – but I have found a few examples, hopefully there are more.

Thanks to Kurt Thomas and DKS Drones for thr amazing video below of  views of Mellor Church very few of us will ever have seen.

For anybody that has seen the spectacular Figgy Pudding Christmas performance at Bramall Hall they will no doubt be in awe of Kate Millward’s beautiful recital of her walk up Knowle Road to Mellor Church. For those who have missed out on this wonderful treat, I thank Kate for allowing me to reproduce it here.

There have also been other poems written about Mellor Church which I copy verbatim below. 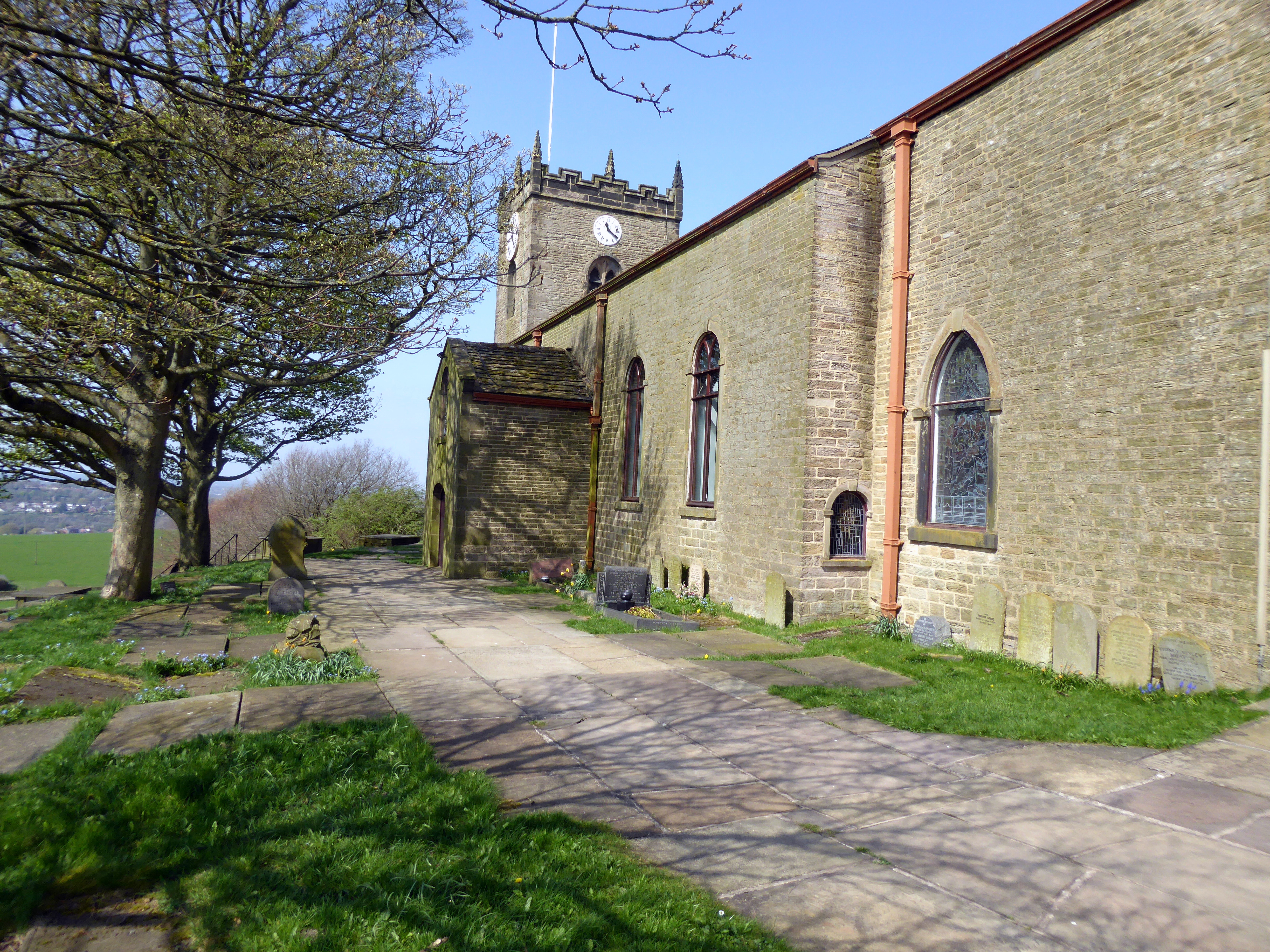 From ‘Figgy Pudding – A Feast of Words for Christmas’ by Kate Millward.

Hush
One evening, in the heady days of mid-December,
an expectant hush cloaked this house.
Outside, beyond the pane, all was darkness.
No lights flickered along the lane.
Only my lucent self gazed back.
This waiting stillness beckoned.

Hugged and muffled in winter wraps,
the hallway snuffed of light,
I stepped out beyond the threshold.
In my wake the door sealed
with its snug clunk of lock in wood.
The chain chattered in reply.

Outside, this hush held, as night froze.
Frost webbed the lawn,
the hedge strewn with silvered threads.
Stubborn clouds, viscous with the portent of snow,
clung to the skyline; tendrils that had waited
for the last lip of light to betray the day,
now stole upon the stars.

Declining the amber comfort of streetlamps,
the shadowy lane that wound its way
up the wooded hill compelled me – propelled me –
past the slumbering school,
nestled and mute in its harbouring dell.
Windows, bedecked by sticky fingers
in a festive frieze of a festive freeze,
witnessed my passage.

Saluted by lopsided snow folk crafted in card,
whilst crêpe-chested robins hustled for space
‘neath chandeliers of scissor-snipped flakes,
I ventured on, up the tree shrouded lane,
amidst ghosted breaths
and footfalls of my own making.

Pausing on the lichened stile –
the guard of the pastureland,
I glanced back at the farmhouse,
proud on its knoll,
and glimpsed tree-lights, lamplight, firelight.
Sketchily immortalised in the icy ground,
a patchwork of frozen hoof prints slowed my steps.

The old church loomed
from the brow of the glowering hill.
Light leaked from its open doorway,
trapping a muddle of children in its halo.
Amongst them, an animated girl in an old blue shawl
with a reluctant Joseph, fidgeting, awaiting their cue;
as a whisper of an ancient carol
escaped across the flagstones,
flitted amongst the gravestones
before being swallowed by the night.

Lingering no longer I journeyed across the churchyard
where my ascent was halted by the sheep-field gate.
And here, in the presence of the humble ewe,
cloaked in a hush that others once knew,
I felt the kiss of winter’s first snow,
which spoke of two millennia’s woe. 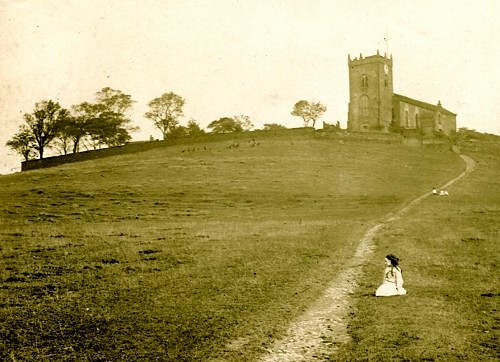 From ‘Peakland Pickings’ by Neville T Sharpe.
Poet unknown but initials are T.E.

Mellor Church, Derbyshire
Most ancient church of Mellor, romantic is the site
whereon the founders planted thee on yon alpine height
that overlooks the valley where Goyt’s swift waters flow
and Marple sends her sweetest peals when gentle breezes blow.

Across the hill whereon thou stands the wind has full career,
and sweeps around the battlements with music loud and clear,
and tears away with furious blast against the hoary tower,
first as a rock it keep-like stands, resisting all its power.

For centuries thy splendid form has stood upon the crest
of that green hill -where round thy walls the weary are at rest;
no tree protects thee east or west, and south thy walls are bare,
but northward stands the Vicarage -and thou art sheltered there.

The summer sun its warmth has shed upon thy sacred walls,
when dawn lights up the eastern sky, and shade of evening falls,
the flowers beneath thy welcome shade have flung their scent around
those mounds of Christians dear within thy hallowed ground.

Without the storm has raged, and winter snows have shed
their pure white flakes in graceful wreaths above the peaceful dead;
a spotless sheet of purity, fit emblem of the just,
covering with fitting robe the Christians’ slumbering dust.

Noble hearts have placed thee there in days long passed away,
and rich and poor within thy walls alike have come to pray;
to thee in sorrow and in joy the Christian has repaired.
And there in God’s unbounded love, his steadfast faith declared.

Once, only once, it’s been my lot to join the happy throng,
and bend the knee in prayer to Thee to whom all praise belongs,
but blissful were the moments spent in that old sacred Fane,
as the preacher told what joys await the followers of Thy Name.

For near eight hundred years the church has crowned the old green hill,
and sentry-like it watch and ward keeps o’er the village still;
thro’ weal and woe, and many a change since Stephen’s distant reign,
beneath its roof have faithful hearts joined in sweet refrain.

Long may the tower of Mellor Church, though stained by many a gale,
rear its time-worned battlements above the lovely vale,
the sacred pile for many an age adorn the old green hill,
Pastor and flock with thankful hearts obey their Master’s will. 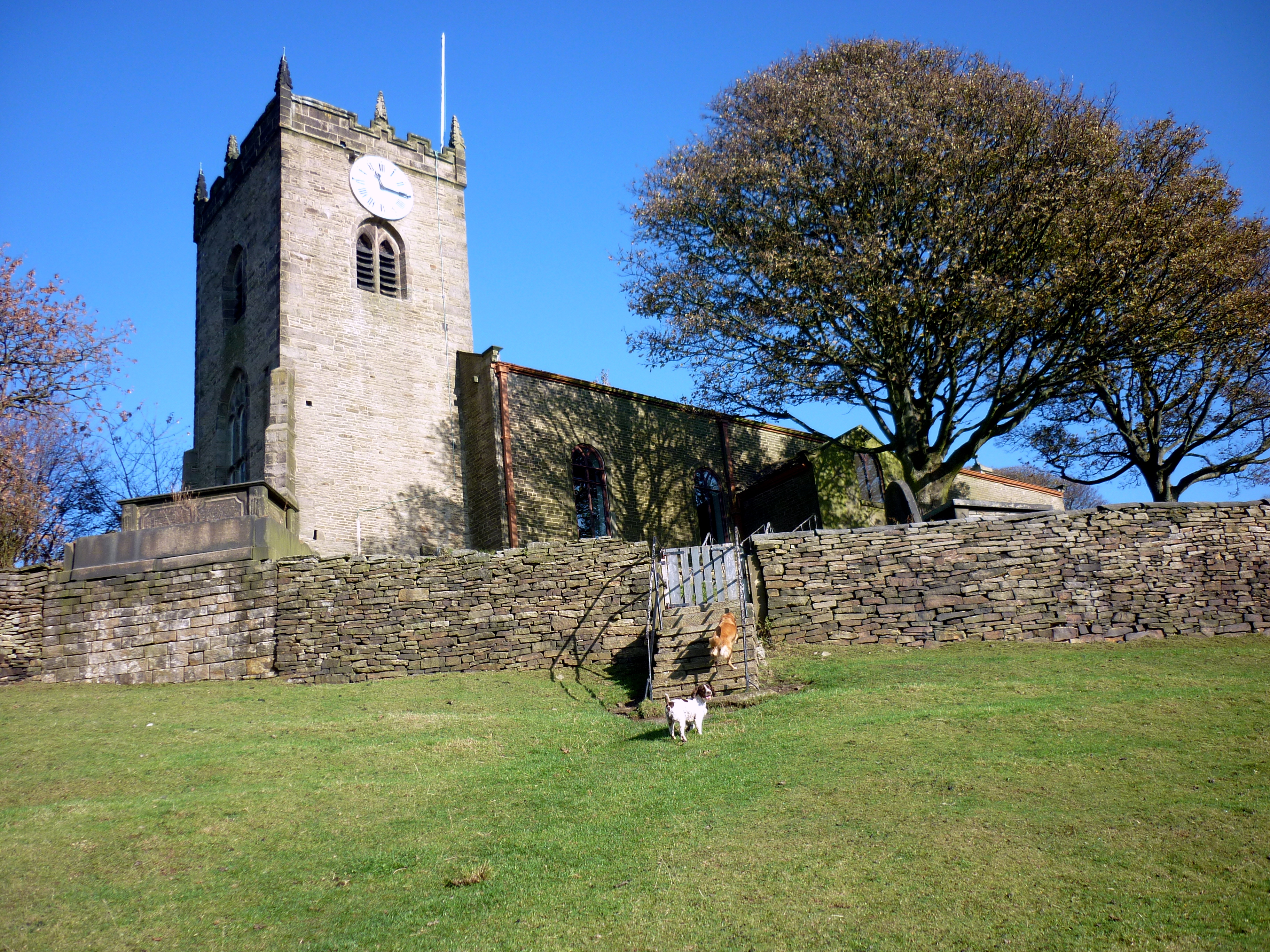 The Week – Sunday
No white-rob’d choir adorns the village church
Where ‘tis my destiny to minister
Yet sweetly sung its ministry of praise,
There too an organ with rich, figur’d front,
Filling a Gothic arch at chancel-side,
Peals forth rich notes of varied melody.
Hard by a venerable pulpit stands,
Carv’d from an oaken trunk, and black with age.
The morning sunbeams shine upon the scene
Through eastern windows of fine stained glass,
Through tints of gold, and blue, and crimson deep.
Plain is the structure of that village church,
Yet as to situation, beautifully
Plac’d as it is upon a lofty height,
Crowning with majesty that eminence.
Except its low and firm-built tow’r, so old,
Well suited to its site, where it has brav’d
The wintry storms through centuries past,
Plain is indeed, that sacred edifice.
But bold it stands, seen all the country round,
Rais’d high above the grassy vales below;
Yet north, and south, an east are loftier hills,
Westward is seen the broad and level stretch
Of fruitful Cheshire’s cheese-producing plains;
And when far off th’ horizon clear denotes
That western show’rs are hast’ning o’er the sea,
Then Beeston’s rock is seen, and Great Orme’s Head,
And a long range of Cambrian mountain tops. 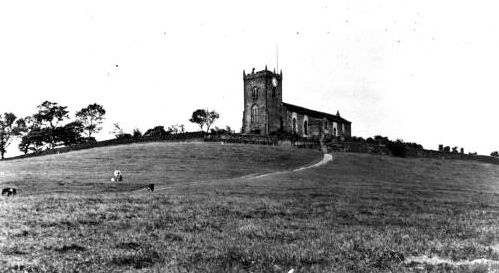 From ‘Glimpses of Mellor’ by KC Hardman.
An extract from a book entitled ‘Spare Minutes of a Country Parson’
Poet: Unknown (several stanza’s are missing)

An Ode on the Ancient Tower of Mellor, Derbyshire
An emblem thou that braves the storm
Which howls around thy massive form,
From year to year, when wintry tempests rage:
For thus Christ’s Church doth daily win
The battle fought with hell and sin.
Since Christ is with His Church from age to age.

But when dark winter’s gales are fled,
And the reviving sun doth shed
Its light and warmth upon thy time-mark’d walls,
O’er soft green vales that, ‘neath thy feet,
Lie basking in the genial heat,
The fleeting shadows of the clouds do fall.

For, from thy tower crown’d hill, we gaze
Till all is lost in misty haze
Where Cambrian mountains glory in their height:
Hills, dales, and woods, and pleasant plains,
Scenes o’er which smiling beauty reigns,
Towns, villages, and tow’rs appear in sight.

Standing aloft in solemn shade,
When summer ev’ning glories fade,
And twilight veils with solemn gloom the ground,
Thou lifts they head in airy space,
‘Twixt heaven and earth a midway place,
In majesty of silence looking around.

Till that last evening may’st thou stand,
God’s temple in this mountain land!
Thy bells the scatter’d villagers remind,
On each recurrent Sabbath day,
That ‘tis their business then to pray,
And seek, that they eternal life may find. 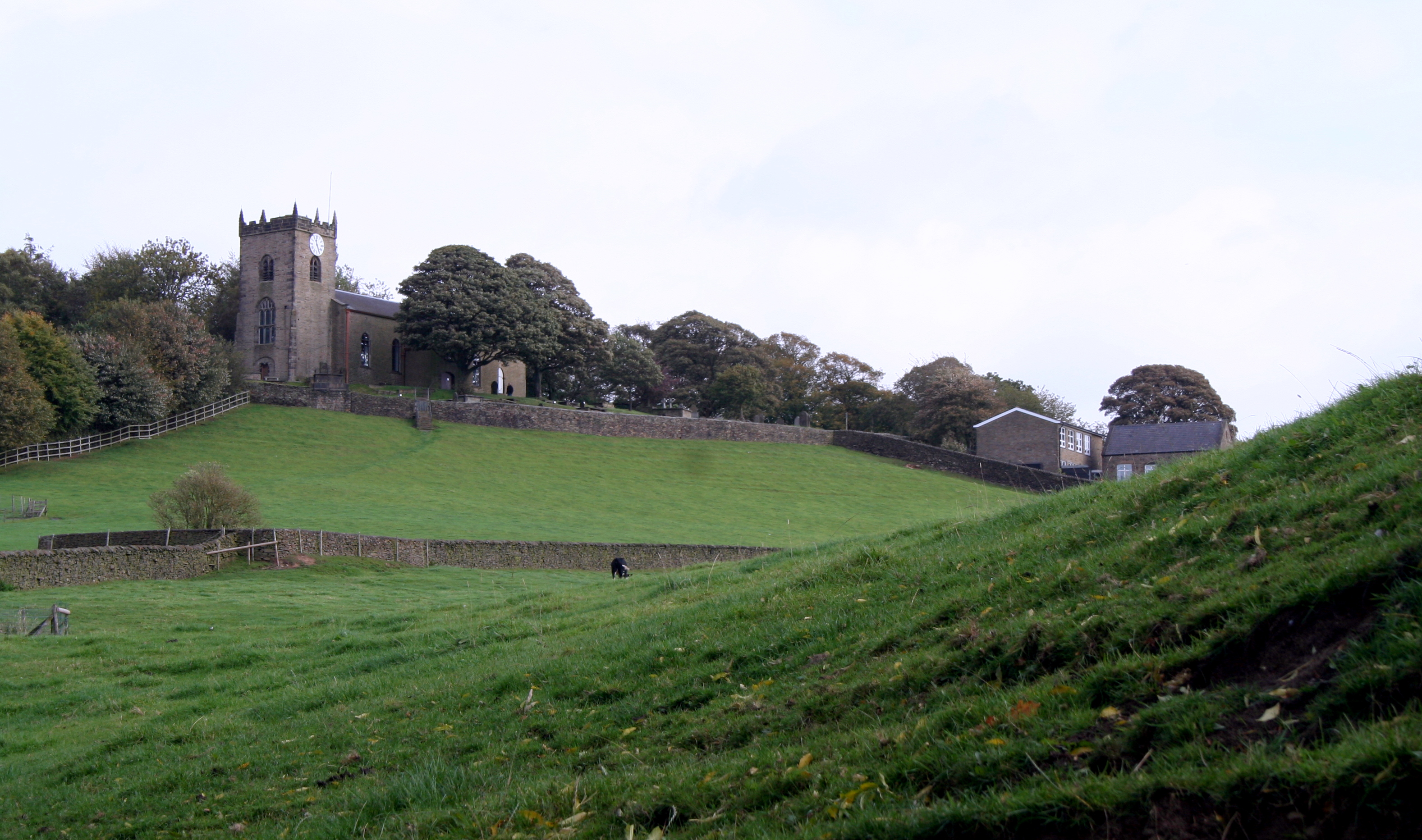 From ‘Glimpses of Mellor’ by KC Hardman.
Poet: KC Hardman

THE TOWER OF MELLOR CHURCH
Above a green Ridge, the ancient tower is seen
Clear ‘gainst the sky. So has it stood
Since, centuries ago, was raised that house of prayer.
Snow, hail, and rain, and stormy wind,
Thunder and lightning, frost and heat, have not prevailed.
The morning sun has greeted it,
And sunset’s crimson fire has flamed on its dark stone.
Over that green ridge the sturdy tower was seen
When rival English roses sternly fought,
When news of Crécy and of Agincourt was heard,
And William Caxton brought his wonderous art,
‘Twas standing there when first English folk
Might read the Bible in their native tongue:
When martyr fires were lighted in our English land:
When Chaucer’s pilgrims went upon their way,
And Shakespeare genius rose to be his country’s pride.
So stood it there when through the dark
The watch-fires blazed to warn of Spain’s oncoming might;
When royal Charles his standard raised.
And Cromwell’s troopers sang their psalms of victory.
And so through years of weal and woe,
To these our days, when direful war has left the folk
Perplexed amid a world distraught,
“Peace and goodwill” which that old tower proclaims
Is potent yet to heal our ills,
Would men but listen, then in faith would act.

Anthea Nichols for pointing out the poems in Glimpses.

Kate Millward for allowing me to use her poem Hush which describes a walk up Knowle Road to Mellor Church.

For copies of Kate’s book FIGGY PUDDING – A Feast of Words for Christmas please use the contact page.

Kurt Thomas for the drone footage.

Bill Clark of Clark Art Ltd for the use of the image of Stacey Manton’s painting.

Richard Leng for use of the images from his book